1 Degradation mechanism of organic matter <br> Biodegradation refers to a series of chemical reactions, such as oxidation, reduction, hydrolysis, dehydrogenation, dehalogenation, etc., caused by the various enzymes secreted by organisms. The process of converting high molecular weight organic compounds into simple organic or inorganic materials such as CO2 and water. The biodegradable hot melt adhesive is mainly a polyester resin, which makes the organic matter decompose and stabilize through the activity of microorganisms. According to the degree of degradation can be divided into preliminary degradation, environmental acceptable degradation and final degradation of three steps: from a physical point of view, divided into heterogeneous degradation and homogeneous degradation of the two mechanisms, the degradation reaction occurs on the surface of the polymer or internal; from From a chemical perspective, there are three mechanisms:
(1) It becomes a low-molecular-weight, water-soluble molecule by hydrolysis of an unstable bond in the main chain;
(2) It becomes a water-soluble polymer by the hydrolysis, ionization or protonation of the side chain groups;
(3) Water-soluble linear polymers are formed by hydrolysis of the unstable cross-linked chains. Therefore, to produce a biodegradable hot melt adhesive, the main chain should contain hydrolyzable groups such as amine groups, hydroxyl groups, urea groups, and ester groups.

2.1 Polylactide (PLA) hot-melt adhesives Polylactide, also known as polylactic acid, is a thermoplastic polymer that hydrolyzes in the absence of light in moisture, and further decomposes into CO2 under the action of microorganisms and enzymes. And H2O is an environmentally friendly material. It is also the most studied material in biodegradable hot melt adhesives. The raw material of polylactide is lactic acid (dihydroxypropionic acid). The structural formula of lactic acid contains both hydroxyl and carboxyl groups, and the reaction activity is relatively high. Under proper conditions, PLA can be dehydrated to form PLA. The synthesis of PLA mainly includes direct condensation polymerization and lactide ring-opening polymerization. The ring-opening polymerization process is:

The degradation process of PLA is an oligomer that is hydrolyzed through unstable C-O bonds in the main chain, and then further decomposed into water and carbon dioxide under the action of the enzyme.

Garry J. Edgington et al. invented a biodegradable hot melt adhesive consisting of 10% to 90% of polylactic acid having a molecular weight of less than 20,000, 10% to 50% of thermoplastic polyurethane or 5% to 35% of hydroxyvaleric acid. Thermoplastic polyhydroxybutyric acid/valeric acid ester (PH BV), 0-5% degradable ester plasticizer, 0-5% stabilizer. The homo- or co-polymeric PLA resin used in the invention is formed by directly polymerizing a hydroxy acid prepolymer or 2-hydroxypropionic acid. The catalyst used is a tin catalyst in an amount of 10-5 to 10-3 mol, and the polymerization temperature is 150- 230 Â°C. The invention can also be used as a hot-melt pressure-sensitive adhesive and can achieve complete biodegradation. The hot melt adhesive is widely used, especially in disposable packaging and other materials that require biodegradation. Lewis.DavidNeal has also invented a completely biodegradable hot melt adhesive formulation. In the polycondensation of polylactic acid, a crosslinking agent polycaprolactone (PCL) is added. This aliphatic polyester acts as a toughening coupling, forming a chain. Among them, Mw of polylactic acid is 500 to 50000 g/mol, accounting for 50% to 99% of the total, while polycaprolactone MW is 200 to 50000 g/mol, accounting for 1% to 50%, due to polycaprolactone in the chain The formation of soft segments in the medium reduces the brittleness of the gum. The authors speculate that this is due to the formation of a star-shaped partially cross-linked structure with polycaprolactone as the core and polylactic acid as the branched chain. The copolymerization of PLA with PCL can be expressed as: 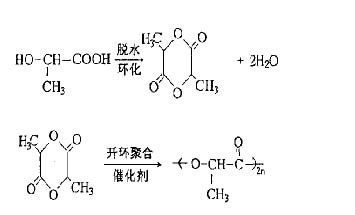